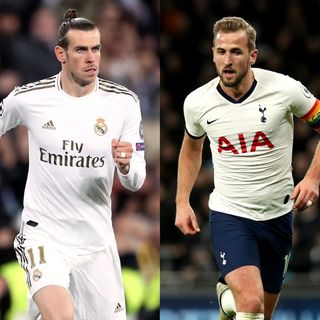 Juventus have strengthened their resolve to sign Harry Kane. Corriere Dello Sport says the 26-year-old England captain suits the needs of Juventus, as a leader with experience but still with youth on his side. Spurs, however, have made it clear Kane would only be sold for a gargantuan fee, although the coronavirus pandemic will likely lead them to abandon their early hope of reaping £200million for the striker.

The Daily Mail says Real Madrid have pulled out of the race to sign Kane, but Spanish website AS says the club is set to sell up to six first-team players, including Gareth Bale. Real are looking to clear space in their budget while the pandemic hits football finances and will put Bale, 30, on the market, along with Colombian James Rodriguez and four other players.

Arsenal are seeking to sign midfielder Thomas Partey from Atletico Madrid in a deal which could lead to them offering striker Alexandre Lacazette to the LaLiga club, The Sun reports. Partey, 26, is said to be Mikel Arteta’s main target this summer, with the Ghanaian rated at around £50million. Atletico recently said they were hoping to extend his contract, but the possible offer of Lacazette, at a time when the Spanish club need a striker, could change their minds.

Arsenal may be looking to bring in a new front man, with Valencia’s Rodrigo Moreno top of the list, according to the Daily Mirror. Valencia are said to be prepared to let the 29-year-old go, and Gunners boss Arteta is hoping to sign the Brazilian for less than £50million. Arsenal’s desire for Moreno could be heightened by the fact Pierre-Emerick Aubameyang is out of contract next year and may be looking for a move.

Moise Kean: Everton’s 20-year-old Italy forward is another who could be on his way to Inter, the Daily Express says.

Joe Hart: The Burnley keeper, 33, is a target for Derby and Turkish club Besiktas, according to The Sun.