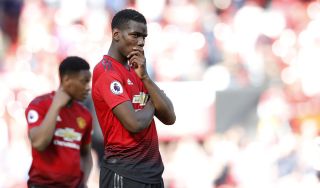 Real Madrid is understood to be willing to pay £135million for Paul Pogba as part of Zinedine Zidane’s rebuild, the Mirror reports. But United want at least £150million to let the World Cup-winning midfielder unite with Eden Hazard at the Spanish club.

Maurizio Sarri will not be allowed to depart Chelsea two years early for Juventus until the Italian giants compensate the Blues for the manager, according to the Daily Mail.

Real Madrid’s Gareth Bale is reportedly no longer being sought by Manchester United. The Red Devils’ executive vice-chairman Ed Woodward has long targeted the Welsh winger but the Evening Standard says that goal has been surrendered in the face of Ole Gunnar Solksjaer’s vision to recruit the strongest domestic prospects to Old Trafford this summer.

The Telegraph reports Aston Villa are willing to pay £14million to secure Leeds’ Kalvin Phillips, but his club are seeking up to £20million for the hometown midfielder.

Dejan Lovren: Liverpool’s Croatian centre-back is being courted by AC Milan, according to Sky Sports.