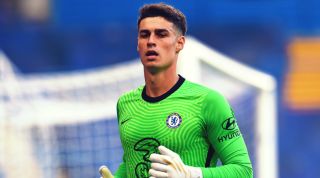 Chelsea manager Frank Lampard was honest and damning in his reflection of Kepa Arrizabalaga's costly mistake in his side's 2-0 defeat at home to Liverpool - suggesting that the writing could be on the wall for the Chelsea No.1.

Kepa has struggled hugely since signing for Chelsea in 2018, making high-profile mistakes in goal, conceding shots from long-range and even appearing to disobey his last manager Maurizio Sarri's wish to substitute him in the 2019 League Cup final. Lampard has refused to be too stinging towards his keeper up until now, however.

The Spaniard has been in and out of the side since Lampard took the reins last summer, though Sunday's defeat against Liverpool marked a new low. Kepa played the ball into Sadio Mané's path for the Reds' second of the match, with Lampard not holding back on the criticism of his player.

"With the Kepa situation, it's a clear mistake," Lampard said in the aftermath of the game, "It's a clear mistake which has cost us because at that point, we have gone on to have a penalty that we maybe score. Those fine margins change games at this level."

"Kepa has to keep working. He has to have support around him, that's very clear."

Despite spending £200m on attacking reinforcements, Chelsea have still been in the market for a goalkeeper with Eduoard Mendy looking certain to join after Rennes manager Stephan Julien confirmed the move.

The 28-year-old Senegalese keeper was thought to be a challenger to Kepa rather than an automatic No.1, but following this weekend, could well be drafted in between the sticks sooner rather than later. 38-year-old Willy Cabellero is still on the club's books, too.

Kepa is unlikely to leave any time soon, given that he is on a rumoured £200,000 a week, two years into a seven-year contract, after signing from Athletic Bilbao for a £70m fee - a world record for a goalkeeper.

Rumours are circling around Antonio Rudiger's future at Chelsea though, following the German defender's exclusion from the squad altogether at the weekend. Rudiger was reportedly fully fit, but still not on the bench, with Lampard opting for Kurt Zouma and Andreas Christensen, who received a red card for denying Sadio Mané a clear and obvious goalscoring opportunity.

Rudiger has arguably been the Blues' best defender in the past couple of years but had a shaky end to last season. With Thiago Silva and Ben Chilwell arriving at Stamford Bridge, Lampard is hoping to have bolstered his defence for now, but the exclusion of Rudiger altogether has raised eyebrows among fans.

RANKED! The 100 greatest FIFA songs ever

As Chelsea haven't been busy enough this summer, rumours of them conducting business with Arsenal seemed to surface out of nowhere today, too. The Blues are said to be interested in Matteo Guendouzi, with Mikel Arteta wanting either N'Golo Kanté or Callum Hudson-Odoi in exchange for the wantaway midfielder.

Chelsea would also like to sign Declan Rice this summer but it looks unlikely, as they may have to pay £80m for the English midfielder.

While you’re here, why not subscribe to the mag - and get every issue delivered to your door!