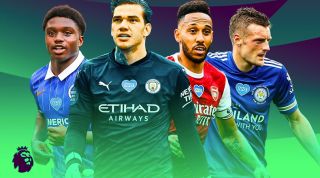 For weeks, we've been sharing our FPL hot tips with you: from team names, to bargains, tips from previous winners, and even who your mates are picking, we've had you covered.

But how much are we to be trusted? Do we really know what we're talking about? In the spirit of transparency, we thought we'd share our Fantasy Premier League picks this season, and how we got on after the first round of games.

WANT MORE? Catch up with all our FPL content here

Team name: Not Athletic (Digital Editor's note: James claims this is the name he uses every year, and not a jibe at any other esteemed publications.)

Tricky opening weekend with the likes of Manchester United and Manchester City not playing. In the first week I took some gambles with some players new to the Premier League - Gabriel at Arsenal being the best of the lot with his goal at Fulham.

Elsewhere, I went for James Rodriguez at Everton and new Chelsea striker Timo Werner in the hope that they will get off to fast starts.

But the team was built around two of last season’s high scorers - Pierre-Emerick Aubameyang at Arsenal and Mo Salah (who I moved things around to bring in 15mins before the 11am deadline).

A 6/10 start – but it could have been far worse had I not seen the light and transferred Salah in an hour before the deadline.

Next job? Working out how to get Man United and City players in. Auba’s having that juicy home game against West Ham before he gets the chop.

I completely overthought my first week team with far too many risks.

With Kevin De Bruyne back this week though, I won't be making wholesale changes just yet. Slow and steady wins the race.

Despite editing a lot of articles on it over time, I have absolutely no interest in FPL, don't really understand it, and can't be bothered to learn.

I only made a team to join in this league, and what you see before you is entirely autocompleted. I didn't make a single transfer, I just pressed the button that does it for me and left it at that. See you next season, FPL app!

My only hope is that I finish above anyone at all in the FourFourTwo league, condemning them to a lifetime of office banter shame. I am currently in second.

While you’re here, why not subscribe to the mag - and get every issue for less than £3.80 delivered to your door!