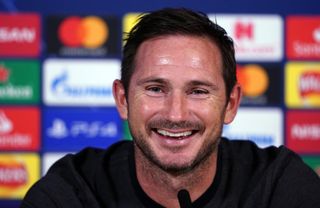 Frank Lampard saluted his Chelsea rookies after they secured his first home win as Chelsea boss by thumping League Two Grimsby 7-1 in the Carabao Cup.

Reece James, one of four debutants, got on the scoresheet as did Callum Hudson-Odoi on his return after five months out injured.

There was also a brace from Michy Batshuayi, an early opener from Ross Barkley, a Pedro penalty and a Kurt Zouma strike on a hugely positive night.

Once Zouma tapped in the fourth, from a fine cross from James 11 minutes,  into the second half, Lampard threw on two more debutants, Tino Anjorin and Ian Maatsen, meaning the Blues finished the night with six academy graduates on the pitch.

Lampard said: “It was pleasing on a lot of levels. It was not complete. But I’m pleased some players who have not been playing so many minutes played, some debuts, and the young lads who came on improved the team which was nice. It’s nice to get that first home win.

“I thought Gilmour ran the game from midfield, and Guehi was solid.  They’ve been outstanding this year.

“With his end product Reece showed what he can do, an assist and a goal, but Reece’s performances on loan last year at Wigan showed the talent he’s got.

“I think he’s going to be a big player for this club. It’s just the start for Reece.

“And the young subs showed how comfortable they are on the ball. Now the hard work starts to get in the team regularly.

“It says a lot about the academy, and nights like this give the opportunity to mix the team up and give them a chance, it gives good recognition to the academy.”

Grimsby, to their credit, gave Chelsea a minor fright when, at 2-0 down, veteran Matt Green scored the goal of the night with a sublime volley.

But when Green hauled down Zouma and Pedro rolled in the spot-kick just before half-time, any hopes of a repeat of Colchester’s win over Tottenham 24 hours earlier disappeared.

It's Man Utd at home next in the Carabao Cup! pic.twitter.com/9qq8qHKwAH— Chelsea FC (@ChelseaFC) September 25, 2019

Barkley had been Lampard’s designated penalty against Valencia and had vowed to continue after his miss that night a fortnight ago.

But Lampard cleared up any confusion, adding: “The good thing in this job is I can choose who does what! I chose Pedro to be captain and take the penalties tonight.”

The Blues were handed a visit from Manchester United in the fourth round.