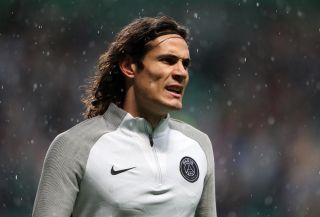 Uruguay international Cavani has handed in an official transfer request, with Atletico Madrid waiting in the wings to recruit the 32-year-old.

Chelsea are able to make January signings after their two-window FIFA transfer ban was lifted by the Court of Arbitration for Sport (CAS), and Lampard has not dampened down any links to Cavani.

Asked whether he had any interest in the player, Lampard said: “He’s a great player; I played against him and I always loved his mentality and attitude, and obviously his goalscoring record speaks for itself.

“I’m not absolutely aware of what the situation is, so we’ll see. He’s an experienced player, but so are many other players out there.

“I think we are young, and we know about the transitions. The idea of bringing in experience is something I’m certainly not absolutely looking away from.

“Because sometimes the young players need a little bit of help, and if that’s the case then that may help us.”

Lampard says there is nothing imminent in terms of incoming transfers. On talk Edinson Cavani wants to leave PSG, Lampard says he is a player he admires. #CHEARS— Chelsea FC (@ChelseaFC) January 20, 2020

Cavani has struck just three goals in 13 appearances in all competitions for PSG, but his pedigree and experience could offer Chelsea a strong alternative to in-form England striker Tammy Abraham.

But the former England midfielder insisted drawing another blank in front of goal does not quicken the Blues’ need for new recruits.

“I don’t think Newcastle hastens anything, it’s just we couldn’t do any business in the summer window,” said Lampard. “At this point it’s something we’ve seen as a bit of a problem in our home games.

“So we’ve got to work hard with the group here, and then if we can improve in terms of goal scoring it’s for sure something we have to look at.”

Victor Moses is understood to be closing in on a loan switch to Inter Milan after returning from a temporary stint at Fenerbahce, and Lampard admitted the winger could well be on his way out of Stamford Bridge again.

“On Victor Moses, he’s obviously coming back from his loan with a view to going elsewhere, and those talks are ongoing as well,” said Lampard.

The Blues are forced into a second substitution as @reecejames_24 hobbles off and is replaced by @emersonpalmieri.— Chelsea FC (@ChelseaFC) January 18, 2020

Reece James is a doubt for Tuesday’s Premier League clash with Arsenal at Stamford Bridge after sustaining a knee problem at Newcastle. But Lampard revealed the young full-back has avoided any serious injury.

“He’s got an injury to the back of his knee area, but it’s not as bad as it could have been or we maybe first thought,” said Lampard.

“He’s in contention for tomorrow but it will be a tight call to see how it settles down in the next 24 hours.”

Asked if he had feared the worst when James picked up the issue at St James’ Park, Lampard added: “Yeah, a little bit, because he had injuries at the start of the season. But now it seems it’s not as bad as it could have been.

“I won’t absolutely count my chickens but hopefully he’ll be okay for tomorrow, and if not, then the weekend.”