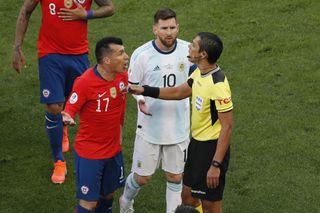 Lionel Messi claimed Argentina were treated unfairly at the Copa America and did not collect his bronze medal after being controversially sent off in the 2-1 third-place play-off win over Chile.

The Barcelona star was dismissed towards the end of the first half of Saturday’s match in Sao Paulo following a confrontation with former Cardiff midfielder Gary Medel, who was also shown a red card.

Messi appeared to have been hard done by, with Chile defender Medel appearing to push his head towards the Argentina playmaker as they squared up, chest to chest.

Messi did not take part in the medal presentations with the rest of the squad, and told reporters of his frustrations following the ceremony.

The Argentina captain suggested he had been singled out following his comments over the “crazy” officiating in the wake of their 2-0 semi-final defeat by hosts Brazil in Belo Horizonte.

“We don’t need to be part of the corruption that we’ve suffered at this tournament,” Messi said, as quoted by Spanish media outlet AS.

“Medel is always right at the limit. With a yellow that would have been the end of it for both of us, but well, maybe what I said recently had an impact.

“What’s important is that the team finished well in the tournament. Maybe this was ordered and I ended up suffering because of what I said.”

When asked about his thoughts on Sunday’s final, Messi said: “Hopefully the referees and the VAR won’t influence things and they let Peru compete, but I think that’s unlikely.”

Earlier Messi had helped set up an early goal for Manchester City forward Sergio Aguero, with Argentina going 2-0 up through Paulo Dybala.

Chile were handed a way back into the match following another controversial VAR review which resulted in a penalty being awarded after Argentina’s Giovani Lo Celso was adjudged to have fouled Charles Aranguiz. Arturo Vidal dispatched the spot-kick.

Despite again not being able to guide his country to tournament success, Messi said: “I’m leaving relaxed, with my head held high and proud of this group that’s given everything. I hope this group gets respect, they’ve got a lot to give.”

Head coach Lionel Scaloni was also left perplexed by some of the decisions.

“Either the criteria is bad, or they don’t agree. It seems to me that they are not yet clear about the VAR system,” he said at a press conference.

On the red card for his captain, Scaloni said: “I still don’t understand what Messi did to be dismissed.”

Coach Reinaldo Rueda said at a press conference: “The evaluation of our performance was positive.

“We have shown to be a team which is very disciplined and I have confidence that we are doing great work.”