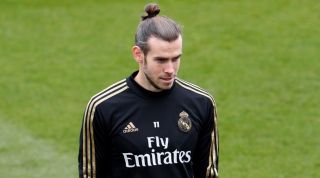 The Wales international has had a turbulent six months since coming close to leaving the Bernabeu for China last summer.

Real pulled the plug on Bale’s lucrative switch to Jiangsu Suning in July, despite the admission of coach Zinedine Zidane that his departure would be “best for everyone”.

He has since been linked with a move to Major League Soccer, but Bale’s agent Jonathan Barnett told ESPN that the 30-year-old is “going nowhere” in January.

Barnett added that Bale is “very unlikely” to leave Madrid over the summer either.

The former Tottenham star, who has won four Champions League titles in Madrid, has a contract until 2022.

His high salary and Real’s eagerness to earn a hefty transfer fee have limited the potential clubs who could finance a bid for the forward.

Bale’s relationship with the Merengues fans took a hit earlier this season after he was pictured celebrating Wales’ qualification for Euro 2020 with a flag bearing the message: “Wales. Golf. Madrid. In that order.”

He has started just three games for the club since then, and was left out of the squad that travelled to Saudi Arabia for the Spanish Supercopa due to an infection.

In total, Bale has scored twice in 14 appearances for Zidane’s side this season.