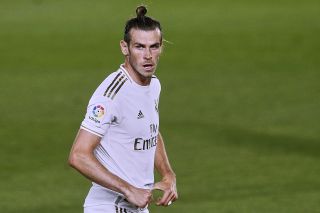 A sensational return to Tottenham Hotspur may be on the cards for Real Madrid and Wales forward Gareth Bale, with the clubs currently considering the various fees and payment options - including whether it would be a loan move or a permanent deal.

One of these options may include Dele Alli being offered as part of a transfer deal, according to reports from the Mail Online.

ALL OR NOTHING Watch the Tottenham documentary on Amazon Prime

It appears Spurs have their noses in front of Manchester United in the race to sign Bale, with the Welshman expressing his desire to return to North London via his agent. A stumbling block is Bale's wages, however, with Spurs unwilling to cover all of Bale's reported £600,000 a week salary.

Daniel Levy has allegedly expressed his determination to bring Bale back to London, and has touted a number of first-teamers as makeweights in any potential deal. It is thought Alli is chief among these and, should the Englishman swap places with Bale in Madrid, it is hoped Real may be open to covering a large percentage of Bale's wages.

This would make a deal more economically viable for Tottenham, who will reportedly lose around £200m this year as a result of the coronavirus. Bale's current salary is more than twice that of any of Spurs' current first team squad, and paying one player so much would likely disrupt the dressing room.

TOTTENHAM PREVIEW Are Spurs and Jose Mourinho really suited to each other?

Whether Real would be interested in signing Alli remains a mystery, though manager Zinedine Zidane is said to be a keen admirer of the goalscoring midfielder.

Bale's return would be a sensational coup for Tottenham, the club who sold him to Real for a then-world record £85m in the summer of 2015. It would also represent a victory over Manchester United, who were said to be exploring the idea of signing Bale if Jadon Sancho cannot be signed from Borussia Dortmund.

Ole Gunnar Solskjaer remains confident of signing Sancho, with personal terms and agent fees agreed, though the clubs remain at an impasse over the transfer fee. Despite this, watching Bale join Tottenham would be a blow before the Sancho saga reaches a conclusion.

He has fallen out of favour at Real Madrid, however, and has been told he has no part in Zidane's plans this season. Bale has two years left on his current deal at the Santiago Bernabeu.

While you’re here, why not subscribe to the mag - and get every issue for less than £3.80 delivered to your door!