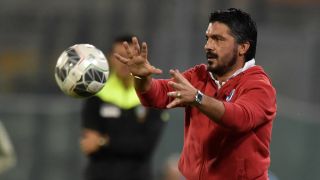 Gennaro Gattuso does not believe his return to AC Milan should be considered a step back in his coaching career.

Former Milan and Italy midfielder Gattuso has been appointed as the club's new youth team coach after leaving Pisa following their relegation from Serie B.

Gattuso, who has also coached Swiss side Sion, Palermo and OFI Crete since hanging up his boots, was unable to keep Pisa in Italy's second division despite the team having the best defensive record in the league.

And the 39-year-old believes the lessons he has learned in his first-team coaching career will be useful as he assists Vincenzo Montella at San Siro.

"I am very happy," Gattuso told Mediaset Premium. "When I was asked at the beginning I thought about it, I spoke with [directors Massimiliano] Mirabelli and [Marco] Fassone.

"It is not a step back, I think it's the right choice. I'm going back to a glorious club that wants to return to greatness. I hope to convey a sense of belonging and to help them improve.

"Family is important, but the choice was made because I'll be back at a club who wants to come back to being great. I really liked the proposal to return as Primavera coach, I was thrilled.

"I am the coach of the Primavera, but will be in close contact with the first team because you have to play with the same idea and to have the same identity. I will listen to the advice that Montella gives me, he's a great coach."