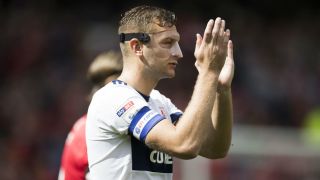 Middlesbrough defender Ben Gibson has signed a new five-year contract with the club.

The centre-back was heavily linked with a move way from the Riverside in the close-season following their relegation from the Premier League.

West Brom had multiple bids for Gibson rejected while a number of top-flight clubs were credited with an interest in the 24-year-old, who earned his first call-up to the England squad in March and was again selected in June.

Gibson, who is still waiting for his first senior cap, was already tied to Boro until 2021 but, after signing fresh terms with the club, he told their official website: "I'm delighted to sign a new contract.

"Everyone knows what this club means to me. I've grown up with the club, I went to the Riverside from a young age and remember all those special European nights.

"I've been lucky enough to go on and play for the club, and even the captain team, and I've had some amazing experiences here."

We're delighted to announce that has signed a new contract at ! October 25, 2017