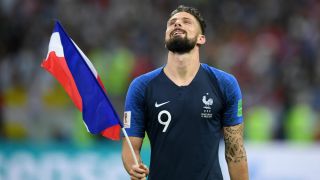 Olivier Giroud says he lived a childhood dream after winning the World Cup with France.

Les Bleus triumphed with a 4-2 win over Croatia in Sunday's decider as an own goal by Mario Mandzukic and strikes from Antoine Griezmann, Paul Pogba and Kylian Mbappe drove France to a second World Cup crown and first since 1998.

The 31-year-old striker ended the tournament goalless and without a shot on target in seven appearances in Russia, but Giroud silenced his critics by lifting the trophy in Moscow.

"It's a great feeling – I mean, it's coming home! I had to say that," Giroud joked to English reporters.

"Honestly it's a dream come true, a childhood dream. I am very proud for all the people who supported us, and myself.

"It has been sometimes difficult you know but it is a privilege for me to be part of this team. We have been very solid, very strong all the way, until the end. And I think it's well deserved."

Giroud will shortly return to training with club side Chelsea, who have just appointed Maurizio Sarri to replace Antonio Conte.