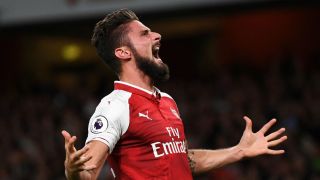 The Arsenal striker scored in the 49th minute of Thursday's Europa League clash against BATE to reach his century for the club.

Giroud becomes the 19th Gunners player to reach 100 goals and is their 12th-fastest to reach the mark after netting in his 237th appearance.

Giroud signed for Arsenal from Montpellier in 2012, with the move worth around £9.6million, going on to win the FA Cup three times.

He was heavily linked with a move away from the Gunners in the most recent transfer window after France team-mate Alexandre Lacazette was signed in a club-record deal, but opted to stay, insisting "our story is not finished".

Giroud has scored at least 15 goals in all five of his previous Arsenal seasons, with this goal taking him to two for the current campaign.

One of his 100 goals, a scorpion kick against Crystal Palace in January, has been nominated for the 2017 Puskas award.