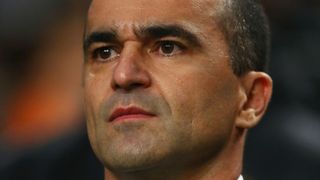 Belgium coach Roberto Martinez accused Greece of playing "an ugly, physical game" after his side were held to a 1-1 draw in their World Cup qualifying match at Stade Roi Baudouin.

The Red Devils went into the game as favourites, having won all four of their previous Group H matches to go top of the table, but Kostas Mitroglou scored in the opening minute of the second half to give Greece the lead.

The visitors were reduced to 10 men when Panagiotis Tachtsidis was sent off before Romelu Lukaku equalised for Belgium on 89 minutes, and there was a further red card for Georgios Tzavellas in injury time but the home side couldn't force a winning goal.

A number of Belgium players appeared to lose their footing throughout the game and Martinez criticised the state of the pitch in his post-match comments, saying: "I've got mixed emotions. There are many frustrations, also about the pitch. But I'm glad we have avoided defeat.

"The performance wasn't enough for a home game, but Greece played a very ugly, physical game."

Belgium were without injured Premier League stars Eden Hazard and Kevin De Bruyne but still managed to create a number of chances, with Marouane Fellaini twice going close in the first half, while Dries Mertens and Axel Witsel squandered opportunities late on in the game.

Martinez claimed the absentees were a factor in the stalemate, saying: "Of course we missed Hazard and De Bruyne.

Opposite number Michael Skibbe was delighted to claim a point that moved his side up to second place in the group and maintained their unbeaten record.

He said: "I am very satisfied. The point is good and the boys carried out the plan to bring us the prize.

"The group remains open. We have to go from match to match and play like we know we can."

He added: "I don't want to talk about the red cards."