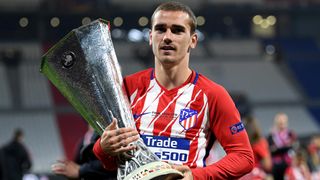 Atletico Madrid star Antoine Griezmann had no interest in discussing his future after leading the Spanish side to the Europa League trophy.

Griezmann, 27, has been strongly linked with a move to Barcelona in the close-season, despite being contracted with Atletico until 2022.

The forward showed once more just why he is in demand, scoring a brace in Atletico's 3-0 win over Marseille in the Europa League final on Wednesday.

But Griezmann, who has now won two trophies since arriving at Atletico in 2014, said any discussions about his future would have to wait.

"Now is not the time to talk about my future," the France international told reporters after being named man of the match.

"You have to enjoy winning the title and celebrate it with the fans."

Griezmann opened the scoring in the 21st minute in Lyon before doubling his side's lead early in the second half, with Gabi sealing the win late on.

After taking his tally to 29 goals this season, Griezmann paid tribute to coach Diego Simeone and his team.

"I insist, it is not the moment to talk about my future," he said.

"It's true that Simeone has taught me a lot, made me a better player, made me be in the top three in the world and with him I have improved every game, every year.

"I owe a lot to Diego Simeone for my progression as a footballer, but also to my team-mates.

"The goal was to take advantage of the opponents' mistakes. It is our style and we have achieved it."