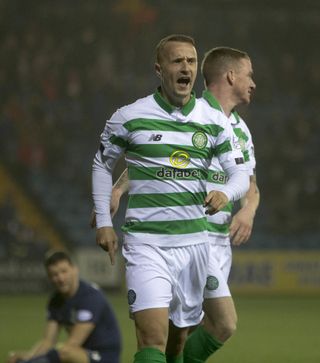 Leigh Griffiths has apologised to the Kilmarnock fan he targeted with some scrunched-up tape.

Griffiths admits he was “stupid” to throw the tape he had just removed from his socks, after being targeted with abuse after coming off during Celtic’s win at Rugby Park last week.

The incident sparked a row involving a supporter and some of Griffiths’ colleagues on the bench, with stewards getting involved.

Griffiths said: “I think it got blown out of proportion. I was getting a bit of abuse and I shouldn’t have thrown the tape. It was stupid of me.

“But it’s water under the bridge now. I am trying to keep my head up and look forward.

“Any player that gets stick, it is hard to block it out. It was so close to the bench, the tape was in my hand, and it was just a quick reaction.