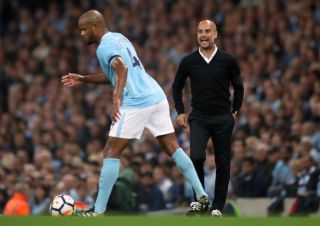 Pep Guardiola has confirmed Manchester City are in the market for a new centre-back.

The Premier League champions are hoping to find a replacement for Vincent Kompany, who left the club after last season’s treble success.

But although City have been linked heavily with a big-money move for Leicester’s Harry Maguire, Guardiola insists it is not vital a signing is made.

“We will see,” the Spaniard said. “We are looking for some names but at the same time we have three centre-backs who can play there and we have two young players in the second team who can help us.

“We shall see if the market is possible and the club believes we can spend that money, but if they don’t, we shan’t spend it.”

Guardiola, who was speaking during City’s pre-season trip to China, was not willing to discuss whether Maguire was a target.

He said: “He is a Leicester player. I know some people like Bayern Munich like to talk a lot about Leroy (Sane), but usually I never speak about players at other clubs. What is going to happen, is going to happen.”

One position City definitely need to find a replacement for Kompany for is that of captain.

Guardiola has said he will let the players choose who takes the armband because it is too important a decision for him.

He said: “All these things about leadership, picking this one or that one. It will happen naturally.

“I’m not going to say, ‘Now it is your turn, then it is your turn’. It’s going to come naturally. You will see who has the attitude to be captain, they will do it together. It’s never a decision I will make.

“The captain has to handle the locker room, not me. If there are problems with me, the captain represents their decisions. They have to pick their captain.

“The captain is the players’ spokesperson to me and to the club. It’s not my decision, that’s far more important than me. I will not give them a shortlist.”

Guardiola admits the departure of Kompany, who has taken up a post as player manager at Anderlecht, will leave a void.

He said: “Vincent was an incredibly important player on and off the pitch. When he was fit, he was always ready on the pitch.

“He was a very important player, he made decisions for the team. He is still an incredible player. I’m looking forward to seeing him on the touchline and seeing how Anderlecht play with him.”

Winger Sane continues to be linked with a return to Germany with Bayern and Guardiola, asked about the situation a number of times in China this week, maintains he wants to keep the player.

He said: “Hopefully he can stay this season and another one and another one. That’s why we offered him a new contract more than one year ago. He has special qualities.

“But it is his decision. We are giving everything but, in the end, if he doesn’t want, what can you do? Nothing.”