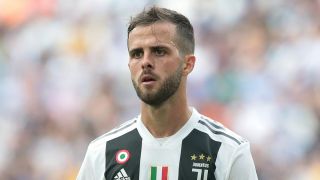 Bosnia-Herzegovina international Pjanic has been strongly linked with a move to the Premier League champions, with Barcelona also considered a likely destination.

The 28-year-old has enjoyed a successful two seasons at Juve but is believed to be interested in a new challenge.

Guardiola, however, insists City are not in the race for his signature.

"No. Pjanic is a player at Juventus. We are not interested in him," the former Barca boss told reporters.

"He is a top player, but we are not interested in him."

.: Everyone is impressed with He's a fantastic player. He's shown us over the last few years. He won the Premier League title. He will improve the squad for sure. It's great to have him with us. July 24, 2018

City's only major move this off-season has been the addition of winger Riyad Mahrez from Leicester City in a reported £60million deal.

Guardiola, who on Tuesday was named on an 11-man shortlist for the Best FIFA Men's Coach award, is leaving the door open to further arrivals before the transfer window closes on August 9.

"We still have a few weeks until the end of the transfer window," he said.

"We are going to decide. Maybe one comes, but at this moment we are good enough. We have players in each position.

"We will see in the last days whether we will sign one player or wait until next season."