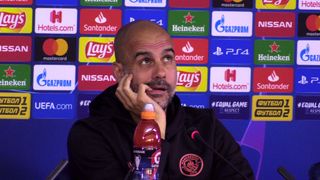 Pep Guardiola claims he will relish the challenge of coping with adversity after an injury to John Stones added to Manchester City’s defensive woes.

The Premier League champions have just one fit senior centre-back after England international Stones suffered a thigh injury in training ahead of City’s Champions League clash against Shakhtar Donetsk in Kharkiv on Wednesday.

Stones joins Aymeric Laporte, who is out until the new year, on the sidelines and, after the departure of Vincent Kompany last summer, City are now short of cover in the position.

Brazilian midfielder Fernandinho is now likely to be pressed into action as an emergency centre-half as City take on the Ukrainian champions in their Group C opener.

And with Stones potentially out for up to six weeks, this is a scenario City may have to get used to.

City boss Guardiola said: “It’s a big challenge. For me as a manager it is an incredible challenge.

“We’ve got just one central defender in Nico – but I believe a lot in the something people don’t know, which is the spirit and commitment.

“We have to get 11 players out and on the pitch and make an extra effort. I like it, (the chance) to prove myself and show we are able to find a solution for the team, to make an incredible step forward and find a solution to this problem that we have.

“It’s not a problem, it is a challenge. They will do it, no problem. My players are the best.

Stones’ injury is a blow to City as they bid to keep pace with early Premier League pacesetters Liverpool and as they prepare to begin their Champions League campaign.

Midfielder Phil Foden has also not travelled to Ukraine due to to a stomach virus.

City and Shakhtar are familiar opponents with this being the third consecutive year have been drawn together in the group stages.

Guardiola also knows Shakhtar well having faced them 11 times throughout a managerial career that has also included spells in charge of Barcelona and Bayern Munich.

“I have bought an apartment here!” Guardiola jokingly said at his pre-match press conference. “I came here many times and it’s always good. With Barcelona, Bayern and now City, I’ve come almost every season.”