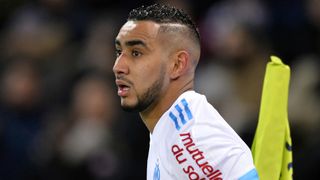 Marseille were held to a dramatic 3-3 draw at Guingamp that could have ended their hopes of a top-two finish in Ligue 1.

The visitors surrendered a 2-0 lead to fall 3-2 behind in the second half, only for Florian Thauvin to rescue a point after goalkeeper Steve Mandanda had been sent off.

The result sees Rudi Garcia's side stay fourth, though, and they will be out of the race for a Champions League spot if second-place Lyon win at Strasbourg on Saturday.

Dimitri Payet was missing for the match at Stade Municipal de Roudourou, the France international reportedly struggling with a muscle complaint – a worry for Marseille just six days before the Europa League final.

They appeared not to miss his influence in a superb first 14 minutes, though, with Valere Germain heading in Thauvin's cross before the captain nodded in a Lucas Ocampos delivery.

Clement Grenier halved the deficit before the break, prodding home after Jimmy Briand hit the crossbar, and he got his second from the penalty spot early in the second half to level the scores.

Briand won and converted a second spot-kick 70 minutes in to become Guingamp's leading Ligue 1 scorer on 30 goals, with Mandanda seeing red for his professional foul, but Thauvin fired in from Bouna Sarr's cross to snatch a point.

Marseille must now hope for favours to keep their hopes of finishing second alive, while hoping Payet returns in time for Thursday's showdown with Atletico Madrid in Lyon.