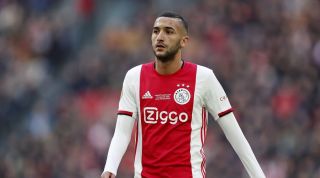 Chelsea will renew their interest in Ajax forward Hakim Ziyech this summer, according to reports.

The Daily Telegraph write that Frank Lampard is keen to add to his attacking options ahead of next season and initially tried to bring Ziyech to Stamford Bridge in January.

However, Ajax dug in their heels and insisted that the Morocco international was not going anywhere before the end of the campaign.

The Dutch giants are currently battling for the Eredivisie title and will face Getafe in the last 32 of the Europa League.

But Chelsea are hopeful of being able to prise him away from Amsterdam when the transfer window reopens at the end of the season.

Lampard was left frustrated by Chelsea's failure to add to their squad last month, and subsequently labelled his side "underdogs" in the race for the final Champions League qualification spot.

The Blues currently occupy fourth spot in the Premier League table but are just two points clear of Sheffield United.

Qualifying for Europe's leading competition would no doubt boost Chelsea's chances of landing Ziyech, who has been linked with several other major European clubs in recent months.

The 26-year-old was instrumental in Ajax's Eredivisie title triumph and run to the Champions League semi-finals last term, scoring 19 goals and providing 16 assists across the two competitions.

And he has continued to be productive in 2019/20, scoring eight goals and setting up 16 more in the Dutch top flight and the Champions League.

Chelsea will send scouts to watch Ziyech for the remainder of the campaign in the hope of stealing a march on rival suitors.

The west London outfit have also been linked with Jadon Sancho but could be priced out of the race for the England international.

Chelsea face Manchester United on Monday in a crunch clash in the race for fourth place.