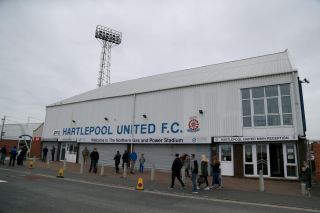 Hartlepool have been charged by the FA following an alleged incident of racism during their National League match against Dover on September 21.

The match was held up for 10 minutes after abuse was directed at Dover’s Inih Effiong by a small number of fans.

An FA spokesperson confirmed on Twitter: “@Official_HUFC has been charged with a breach of FA Rule E20 following the game against @DoverAthletic in the National League on 21 September 2019.

The Club has made the following statement following receipt of an FA Charge under Rule E20.#Poolshttps://t.co/ILgexj4zgp— Hartlepool United FC (@Official_HUFC) October 29, 2019

“It is alleged that the club failed to ensure its spectators, and all people purporting to be its spectators or followers, conducted themselves in an orderly fashion and/or refrained from using abusive and/or insulting words and/or behaviour, which included a reference, whether express or implied, to race and/or colour, whilst attending this match.”

Hartlepool have been given until November 5 to respond to the charge, and have confirmed they will respond accordingly.

The club said in a statement: “We have made clear our condemnation of individuals’ behaviour during the fixture against Dover Athletic, and have continued to underline our position on discrimination or abuse of any kind through our actions rather than words.

[1/4] @Official_HUFC has been charged with a breach of FA Rule E20 following the game against @DoverAthletic in the National League on 21 September 2019.— FA Spokesperson (@FAspokesperson) October 29, 2019

“Our aim has been to set the example on how to respond to matters such as this and we will continue to explore all avenues of education and improvement in that regard.

“We look forward to a fair hearing with The FA.”

Craig Hignett, who was Hartlepool manager at the time, and Dover boss Andy Hessenthaler said after the match that they had considered taking their teams off the pitch following the incident.