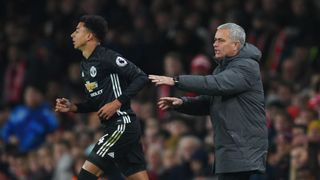 Jose Mourinho has agreed a Manchester United contract extension, committing his future to the club through to 2020 with an option for a further 12 months.

United executive vice-chairman Ed Woodward highlighted Mourinho's promotion of young players as part of the club's announcement of the news.

Mourinho himself has also trumpeted youth development as a key part of his job, infamously producing a long list of players to whom he claimed to have given a chance when he was unveiled as United's new boss in 2016.

But do the numbers back up Mourinho and Woodward's claims?

With the help of Opta data, we assess whether or not the United manager has succeeded in developing United's next generation.

Although the arrival of Alexis Sanchez from Arsenal appears to push Rashford down the pecking order, the local lad is actually United's most-selected player under Mourinho. Out of the Portuguese's 99 games in charge - he brings up his century in the FA Cup fourth round at Yeovil Town on Friday - Rashford has made 88 appearances and is the second-top goalscorer in the Mourinho era with 20, behind only Zlatan Ibrahimovic. Rashford has created a chance every 75 minutes under Mourinho, whereas with Louis van Gaal at the helm that number stood at 144. The flip side of the argument is that a player of Rashford's vast potential could - and would - have developed under another manager.

Martial is enjoying a fantastic run of form, having scored in three successive Premier League appearances, including the winner in a 1-0 victory at Burnley. But is he another who will see his game-time restricted following the signing of Sanchez? The France international has played almost exactly the same number of minutes pre and post Mourinho's arrival - 2,632 compared to 2,645 - despite playing 47 games during his reign and only 31 before. Martial is now involved in a goal every 115 minutes, whereas previously that figure was 175, so there has been some progress. Intriguingly, Martial appears to have been a more dangerous finisher before Mourinho's appointment, having converted 19.3 per cent of his efforts pre-May 2016 as opposed to 16.88 per cent since.

Like Martial, Lingard is arguably enjoying the form of his life at Old Trafford, with the England international having scored 11 goals in all competitions so far this season. His performances have resulted in the 25-year-old forcing his way into Mourinho's plans as an automatic selection in the number 10 role. That Lingard has seen off the likes of Shinji Kagawa and Henrikh Mkhitaryan to claim the position as his own is a sign of his development and he has created a chance every 51 minutes under Mourinho, compared to every 119 minutes before his arrival. Lingard's minutes per goal involvement has made a vast improvement too, moving from 332 down to 175. Only four players have made more than Lingard's 71 appearances in the Mourinho era, indicating he has become a key part of the United jigsaw.

While it is fair to say Rashford, Martial and Lingard have made positive strides under the leadership of Mourinho, the same unfortunately cannot be said for Shaw. It has to be noted the left-back's development at Old Trafford suffered a brutal blow when he suffered a broken leg in a Champions League game against PSV in September 2015. But at times Mourinho appears to have gone out of his way to criticise Shaw, singling the player out for blame on a number of occasions. Mourinho changed his tune of late, describing Shaw as one of the best left-backs in the world after he enjoyed a rare run of starts. But, true to form, Mourinho followed up praise by dropping Shaw at the first opportunity, selecting Ashley Young out of position instead. Shaw has made 29 appearances for Mourinho's United, which is only a handful more than David de Gea's backup in goal, Sergio Romero.

After Rashford, Martial and Lingard, the trail for young players developed at United under Mourinho appears to go cold. Timothy Fosu-Mensah, Axel Tuanzebe and Andreas Pereira have all been allowed to go out on loan despite being regarded as strong prospects. Josh Harrop scored a fine goal on his Premier League debut against Crystal Palace, but was then allowed to leave to join Preston North End. Angel Gomes, regarded as the most exciting young player at Old Trafford, has played just two minutes in a brief substitute appearance under the Portuguese coach. Mourinho has at least maintained United's 80-year history of including at least one homegrown player in every matchday squad, regardless of the competition. In the 2016-17 season, Mourinho's first at the club, the average age of his team was 27 years and 28 days, which has come down to 26 years and 345 days in 2017-18. Mourinho is a PR master, expert at exaggerating his own abilities. But in the area of youth development, Mourinho's own hype does not quite stand up to scrutiny.

Jose is relishing the opportunity to take even further...Watch the interview in full on from 18:30 GMT: January 25, 2018