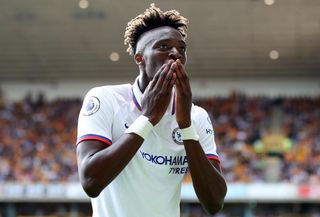 Chelsea striker Tammy Abraham has expressed his hope that “this can be my season” following his hat-trick in the 5-2 win at Wolves.

Abraham’s treble on Saturday saw him surge, with seven goals, to the top of the Premier League scoring charts, where he was subsequently joined by Manchester City’s Sergio Aguero.

The 21-year-old, who had gone into the game having netted back-to-back braces in the previous two matches, scored in the 34th minute with a turn and shot, added a 41st-minute header and slotted in his third 10 minutes into the second half.

Abraham was quoted on Chelsea’s official website as saying: “I’ve been working hard and hopefully this can be my season.

“It’s up to me to keep showing the gaffer (Frank Lampard) in every game and training session that I’m hungry and I want success.

“He told me at half-time to stay on and get the hat-trick so I believed and stayed focused. I’ve just got to be ready to take every chance that comes my way with both hands. I’m working hard and I’m just delighted to see that pay off with my goals (on Saturday) as well as the three points.”

Abraham was among a trio of young Chelsea academy graduates for whom it was a particularly good day – the others being defender Fikayo Tomori, also 21, and 20-year-old midfielder Mason Mount.

England Under-21 international Tomori opened the scoring in the 31st minute with a superb strike from around 30 yards – his first Chelsea goal.

The hat-trick from Abraham, who won two senior England caps in 2017, then put Chelsea 4-0 up, before he accidentally diverted the ball into his own net with his hand in the 69th minute to make it 4-1.

Abraham departed the field eight minutes later due to an apparent injury, although it seemed it was not serious.

Wolves then scored again in the 85th minute through substitute Patrick Cutrone, before Mount, who made his first two senior England appearances during the recent international break, fired past Rui Patricio in added time.

Abraham added: “I was thinking ‘don’t shoot, Fikayo’ but everyone is delighted for him. In training, he’s been trying it every day and smashing windows but (against Wolves) it paid off – it was a great strike.

“We (he, Tomori and Mount) were the last people off the pitch because we were discussing how we’ve all scored in the same game for Chelsea. We’ve dreamt of that since we were little boys and we made it happen.”

All three players are shining in the top-flight this term after playing Championship football on loan last season – Abraham at Aston Villa and Tomori and Mount at Derby under Lampard.

While Saturday’s result took Chelsea up to sixth in the table, Nuno Espirito Santo’s Wolves sunk to 19th.

They have won six out of six matches in Europa League qualifying this season but have not registered a victory in the Premier League, drawing three games and losing two.

Regarding the continental campaign affecting league performances, defender Matt Doherty was quoted on Wolves’ official website as saying: “I think that would be an easy excuse to use or for people to say, but I don’t think so.

“We’re probably a bit ahead of schedule in terms of when we came back in for pre-season and the games that we’ve had, but if anything, it’s probably just got us right.

"Bad games can happen, what is important is we don’t repeat them, we have to react and be better.— Wolves (@Wolves) September 14, 2019

“I can’t use that (Europe) as an excuse at all.

“We’re not concerned, not just yet. We’ve had a lot of games, drew the first three, but we could have won a couple of those.

“(Against Chelsea) the result and the performance wasn’t great, but in the previous games, I don’t think our performance was that bad, so we’re not really worried about it at all yet.”