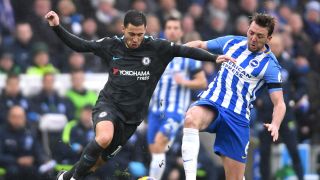 Eden Hazard hailed forward colleagues Willian and Michy Batshuayi after Chelsea got themselves back among the goals against Brighton and Hove Albion.

Hazard netted twice in a man-of-the-match performance, while he also combined with Batshuayi to craft an incredible strike from Willian in a 4-0 triumph.

Chelsea headed into the match on the back of a penalty shootout win over Norwich City in the FA Cup that was preceded by three consecutive 0-0 draws in all competitions and Hazard felt their blistering start at the Amex Stadium – it was 2-0 within six minutes – was key.

"We started the game very well," he told Sky Sports, having moved on to 101 top-flight goals in his career.

"The combinations between Michy, Willi and me, even the midfield, was brilliant.

"We need to do more like this week after week."

Hazard also reserved praise for goalkeeper Willy Caballero, who deputised for the injured Thibaut Courtois and recovered from some sketchy early decision-making to produce stunning saves from Tomer Hemed and Ezequiel Schelotto.

"At the end of the first half we had a bit of a problem. Thibaut Courtois was not here but Willy was there and he saved some goals.

"It's 4-0 but he did a great performance. He deserved this. He did this against Norwich and now today. He's a really good keeper."

Caballero did have a lucky escape when he appeared to trip Schelotto in the area at 2-0 and the former Manchester City goalkeeper conceded he side enjoyed the benefit of the doubt – in contrast to when Willian was booked for simulation following a VAR review against Norwich.

"I don't know, this is for the referee," he said of the flashpoint. "I spoke with the referee in the second half. It is so difficult for them.

"But the other day we lived this kind of situation in our side in the cup. These are things of the game and things to talk about in the newspaper."