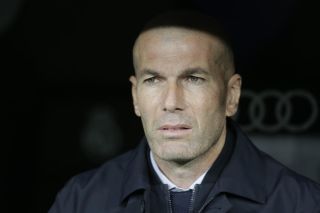 Hazard has not featured for Real since suffering an ankle problem on November 26 in a Champions League match against Paris St Germain.

The 28-year-old Belgium international will not travel to next week’s four-team tournament in the Middle East in order to continue his rehabilitation.

🎙💬 Listen to what #Zidane said ahead of our first match of the year! #RMCitypic.twitter.com/PxRjzb4xjs— Real Madrid C.F. 🇬🇧🇺🇸 (@realmadriden) January 3, 2020

Zidane, whose team return to LaLiga action against Getafe on Saturday following the winter break, expects the former Chelsea player’s recovery to be a gradual process.

“He’s 100 per cent out of the Super Cup,” Zidane said of Hazard at his pre-match press conference.

“He’s not travelling and at the moment he’s in a normal process of recovery.

“I hope that just after the Super Cup, bit by bit, we could see him with us again.”

Real, who on Wednesday face Copa del Rey holders Valencia in the semi-finals of the Super Cup in Jeddah, suffered a dip in form prior to Christmas, recording three successive draws, including a goalless El Clasico against Barcelona.

With the January transfer window now open, Zidane was once again quizzed on a potential move for Manchester United midfielder Paul Pogba but refused to be drawn on the speculation.

“I’m not going to reply anything, really,” said Zidane.

“Paul is a player of another team and the important thing for him – because I think he is injured – is to get back playing, and that’s it.

“I wish the best for him but the most important thing for us is the players that I have.”

Zidane, who returned to the club for a second spell in March, insists it would not be failure to end the current campaign without silverware.

“Failure is to not try, not compete and not give everything. I think that’s failure,” said the Frenchman.

“For me, the important thing is every day to train to your maximum, give everything in every game out on the pitch and then we’ll see.

High-flying Getafe sit in sixth position ahead of the visit of the 33-time Spanish champions on the back of three wins from their last four league matches.

He said in his pre-match press conference, reported on the club’s official Twitter feed: “Getafe is a team that has earned respect based on doing things right. We have proven to be a difficult team to beat.

“Winning against @realmadrid, it’s very complicated. For us the main thing is to add the necessary points to achieve our goal.”