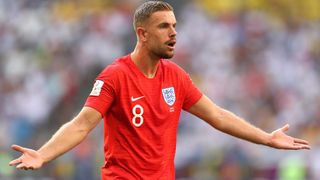 England midfielder Jordan Henderson is hopeful over his fitness ahead of his team's World Cup semi-final against Croatia.

Henderson, 28, came off late in England's 2-0 win over Sweden in the quarter-finals in Samara on Saturday due to a hamstring injury.

But the Liverpool captain believes he will be ready to face Croatia in Moscow on Wednesday.

"I was just a little bit tight before the game, so towards the last 20 minutes I just overstretched and I felt it a little bit," Henderson told UK newspapers.

"But it doesn't feel too bad, so hopefully it'll be fine."

Eric Dier replaced Henderson in the 85th minute of England's win against Sweden.

England coach Gareth Southgate said: "Hendo was feeling tightness in his hamstring, which was why we made the change.

"We'll just have to assess the bodies."