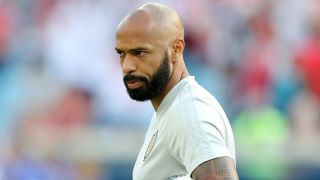 Thierry Henry has spoken to Egypt over the prospect of becoming their next head coach, according to an agent involved in the talks.

Nader El-Sayed, the former Zamalek goalkeeper who now works as an agent and in sports marketing, says he spoke with Henry's representative and Egyptian Football Association (EFA) board member Hazem Emam in London.

El-Sayed claims the former Arsenal star is waiting to learn more of the EFAs' plans for developing the team before deciding whether to take up the offer.

"We had a meeting with Thierry Henry's agent in London, and Hazem Emam was present. Henry is waiting for the EFA's project for the team before deciding on the offer, apart from the economic aspect," he told Egyptian radio, as quoted by King Fut.

Henry has been working as Roberto Martinez's assistant with Belgium since 2016 but has been pursuing the chance to take on a top job at either club or international level.

He stepped down from a lucrative role as a television pundit this month and was linked with the Aston Villa manager's job, although the Championship club decided to back current boss Steve Bruce.

Egypt have been without a coach since Hector Cuper left his post in June, following their group-stage exit from the World Cup.