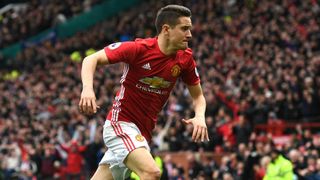 Ander Herrera has been named Manchester United's Player of the Year for 2016-17, ending David de Gea's stranglehold on the award.

United goalkeeper De Gea had claimed the coveted Sir Matt Busy Player of the Year accolade in the three previous seasons but his dominant run was ended by Spanish midfielder Herrera on Thursday.

Herrera, 27, finished 242 votes ahead of utility Antonio Valencia – who took out the Players' Player of the Year award – while top goalscorer Zlatan Ibrahimovic was third.

"It's very special for me to win this award because when you see the list of winners, you realise how important it is," said Herrera. "And I stopped the record of David!

"I feel it [the fans' affection] and I'm very thankful but I think a Manchester United player can never stop; we have to keep giving them the affection back because you can see we don't always perform at our best, yet they are always behind us."

Herrera has enjoyed somewhat of a breakout season under manager Jose Mourinho, making 31 Premier League appearances and 49 in all competitions – scoring twice.

Axel Tuanzebe won him the reserves gong, while 16-year-old Angel Gomes became the youngest winner of the Jimmy Murphy Youth Team Player of the Year – previously won by the likes of Ryan Giggs and Phil Neville.