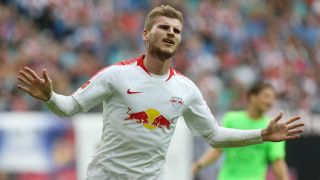 RB Leipzig coach Ralf Rangnick believes Timo Werner is in the "best hands" at the club and he assumes the forward will turn down Bayern Munich.

Werner, 22, has been linked with a switch to Bayern despite being contracted at RB Leipzig until June 2020.

The Germany international is seemingly interested in a move to the Allianz Arena, but said he was under no pressure to make a decision immediately.

Rangnick feels Werner, who has been offered a contract extension, could yet remain at RB Leipzig.

"I believe we said enough in the past about that subject. He has a contract until 2020 and he has a signature-ready extension of his contract on his table," Rangnick said after his team were beaten 1-0 by Bayern on Wednesday.

"He will think about that over Christmas and the winter break now. If he is well advised, I assume, since I know his agent for a long time, then he knows what he has here in Leipzig.

: "It was a very hard-fought game. Both sides gave their all. It's just a shame that we didn't get a point, but you must be ready for every eventuality playing here - it just didn't work out today. Despite the result, we can leave with our heads held high." December 19, 2018

"I also do not think that this career development that he has made would have happened at any other club. That's why I assume he will stay with us.

"You will see what will be in three or four years. At the moment he is in the best hands with us."

Werner has scored 13 goals in 20 games this season, leaving him on track to better the 21 he netted in each of the past two campaigns.