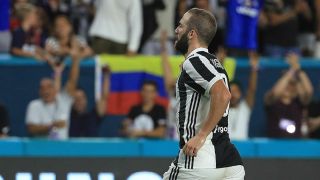 Gonzalo Higuain struck a hat-trick as Juventus warmed up for Saturday's Serie A game against Chievo with a 5-0 friendly thumping of Chieri on Wednesday.

Higuain was left out of the Argentina squad for their September World Cup qualifiers against Uruguay and Venezuela, which yielded two draws with only one goal scored for Lionel Messi's side, who are in danger of missing out on a place at Russia 2018.

And the 29-year-old provided a timely reminder of his goalscoring talents with a blistering treble against local outfit Chieri in Vinovo.

Winger Federico Bernardeschi opened the scoring for Juve and Miralem Pjanic added a header in a comprehensive victory for the Serie A champions.

Juve have begun their attempt to win the Scudetto for the seventh year in a row with successive victories against Cagliari and Genoa, with four other sides boasting perfect records after two games.