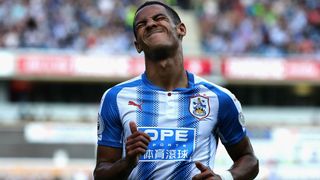 Huddersfield Town were left to rue a host of missed opportunities as Southampton survived a first-half onslaught to earn a 0-0 draw on Saturday at the John Smith's Stadium.

Elias Kachunga, Rajiv van La Parra and Steve Mounie were all guilty of wasting chances as the Terriers failed to convert their dominance into a third straight Premier League victory.

Hosts Huddersfield, trailing only Manchester United after two matches on their top-flight return, were kept at bay by Saints goalkeeper Fraser Forster and Mauricio Pellegrino's side improved after the interval, gaining a foothold in midfield and frustrating their newly-promoted opposition.

The stalemate means both sides remain unbeaten after their first three matches, although David Wagner will take greater positives from another performance in which his side looked at home in the Premier League.

FULL TIME: 0-0 Mauricio Pellegrino's men have to settle for a point in Yorkshire. August 26, 2017

Manolo Gabbiadini gave Southampton an 11th-minute lead last weekend against West Ham and Nathan Redmond should have repeated the trick when his run inside was picked out by Steven Davis, but the winger placed his low finish marginally wide of the far post.

Huddersfield responded with a sustained period of pressure as Maya Yoshida first produced a vital block to deny Kachunga, before Forster bravely scrambled a cross away from Mounie's feet.

Kachunga was again involved in the 23rd minute when he led a lightning counter-attack down the right, only for an unmarked Van La Parra to meekly hit the cut-back into recovering Saints midfielder Davis.

Mounie, scorer of a debut brace two weeks ago, next hit a scuffed attempt wide of the upright from Tommy Smith's dangerous low cross.

The former Celtic goalkeeper almost undid his good work late in the opening half when he spilled Chris Lowe's cross, but Huddersfield again passed up the opportunity as Kachunga failed to beat Forster with the follow-up.

Southampton began the second half in more positive fashion with Gabbiadini shooting straight at Jonas Lossl from just outside the area.

Town boss Wagner was forced into a substitution, introducing Kasey Palmer in place of Van La Parra after the Dutch winger was unable to shake off a knock sustained in Cedric Soares' challenge.

Pellegrino responded by injecting in-demand striker Shane Long just beyond the hour, but the Republic of Ireland striker was afforded little opportunity to break the deadlock.

James Ward-Prowse did see appeals for a penalty waved away in the 82nd minute, although the midfielder might have held his feet in the area when a rare opening to snatch the points presented itself.

The visitors produced their best moments in the closing stages as Redmond produced a sharp save from Lossl, before Huddersfield captain Smith cleared Ryan Bertrand's header off the line.