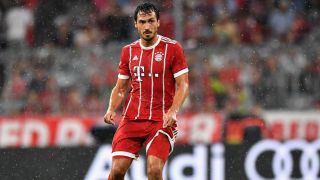 Bayern Munich defender Mats Hummels has urged his team-mates to bounce back in style from their surprise 2-0 defeat to Hoffenheim on Saturday.

Carlo Ancelotti's side were a long way off their best at the Rhein-Neckar-Arena and were made to pay through Mark Uth's clinical double.

Bayern now turn their attention to a Champions League clash with Anderlecht on Tuesday before Mainz visit the Allianz Arena next weekend in league action – and Hummels is targeting maximum points.

Hummels said: "The result isn't the end of the world, so long as we show the right reaction – ideally with two victories."

Goalkeeper Manuel Neuer, meanwhile, lamented his side's inability to score when on top against the hosts.

"We started very well, played very well and had a total control over Hoffenheim," he said. "We should have taken the lead."

The win puts Hoffenheim level at the top of the Bundesliga with Hannover and Borussia Dortmund, but defender Benjamin Hubner is not getting carried away at this early stage of the season.

He said: "We are enjoying the victory today and have a hard time in front of us. It makes no sense to look at the table.

"We all knew it was going to be hard today. The fact that we can beat Bayern again is, of course, a dream. We have brought the right amount of emotion to defeat the Bavarians. I am very proud of the team."