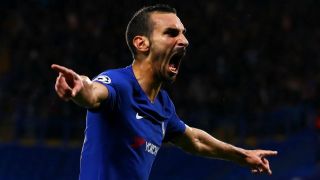 Davide Zappacosta described his full Chelsea debut as the best night of his career after marking his Stamford Bridge bow with a stunning goal.

Zappacosta joined from Torino on transfer deadline day and was picked from the start for the first time in Tuesday's 6-0 Champions League win over Qarabag.

The full-back celebrated the occasion with a wonderful strike that put Chelsea 2-0 up, finding the net by bending a cross-cum-shot in from the right wing.

And, in an interview with Gazzetta dello Sport, he said: "Honestly, before I shot I was looking in the penalty box for an unmarked team-mate.

"Then I kicked it and at that point I didn't understand anything. I went through those moments in a genuine trance: the ball in the net, the celebrations of the fans, the embrace from my team-mates.

"It was total chaos, but a beautiful chaos.

"The best night of my career? Without a doubt. I've never experienced a story like this. My Champions League debut, my first match for Chelsea at Stamford Bridge and a spectacular goal. All perfect."

Zappacosta became the 100th Italian player to score in the Champions League and added: "I didn't actually know that, it makes it even more perfect. I hope I don't wake up and realise it was all a dream!

"When we were warming up I noticed that the stadium was half empty, which I thought was strange since it was Chelsea's return to the Champions League after a year out.

"We went to the dressing room for our final preparations and when we came back out the stadium was full, a real cauldron. Playing with fans like that lifts you.

"I have to improve my English and I'll start this week. This experience at Chelsea is something to be done 360 degrees, so knowing the language is also important.

"I want to give and get the most out of this. It's a crucial period for my career and I want to live it intensely.

"Goals like the one against Qarabag come along once in a lifetime, daily life is another story."