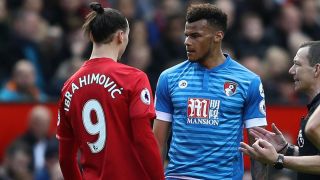 Mings received a five-match ban after stamping on Ibrahimovic's head during the 1-1 Premier League draw between the teams at Old Trafford in March.

Ibrahimovic was suspended for three games for an elbow on Mings, who insists his stamp was completely accidental.

"It was an accident," the English defender told The Guardian.

"The fact that I jumped, slightly colliding with [Wayne] Rooney in the air and I was looking at the ball at the time, there's no way I could have meant to stand on his head.

"And I would hate for anyone to think otherwise, that I would intentionally try to stamp on someone's head when they're lying on the floor.

"So the ban was really disappointing because of why it came about and the fact I'd just had a run in the team. I was finding my feet and I think I played well in that game at United but that was my last match of the season."

Mings, whose team visit Everton in the Premier League on Saturday, said he was initially unaware of the significance of the incident.

However, the 24-year-old said he knew shortly after the break – thanks in part to United manager Jose Mourinho.

"I didn't recognise up until half-time that it was even a big deal," Mings said.

"Because I hadn't meant to do it, I didn't feel like it would be a talking point. But I realised when Mourinho came over when we were coming out for the start of the second half and started giving me some abuse, saying: 'You think you're clever. You're going to get an eight-match ban.'"