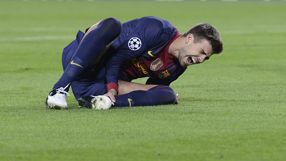 Pique was forced out of the opening Group G clash against Spartak Moscow last month, which the side won 3-2, and remained on a lengthy list of defensive casualties that have upset the smooth running of Barca's well-oiled machine of late.

Injuries have deprived Vilanova of his entire first choice back-line of Eric Abidal, Carles Puyol, Pique and Dani Alves and the side uncharacteristically conceded four goals in a thrilling 5-4 La Liga victory at Deportivo La Coruna on the weekend.

On top of that, holding midfielder Sergio Busquets, who can also play at the back, is suspended.

"The missing players aren't an excuse for everything," Vilanova told a news conference.

"At the end of the day, all the players are Barca players and capable of playing to the highest standard."

Barca are unbeaten and top La Liga ahead of Atletico Madrid on goal difference, but have conceded the same number of goals (11) as bottom club Osasuna.

"The number of goals conceded has risen," he added. "But we are also the team who has scored the most (24) and sometimes this compensates.

"When we aren't able to score as many goals that's when we'll have problems. I would prefer to win scoring the most possible goals and not conceding any but when it comes down to it, I just want to win."

Barca top the group with two wins from two, ahead of second- placed Celtic with four points.

Vilanova warned a team who were able to win 3-2 at Spartak Moscow last time out, against a side who rattled Barca at the Nou Camp, should not be written off.

"When the draw was made, many people did not think Celtic would qualify for the next round, but they have a chance" he said.

"Home games are very important and if we can win this one we'll take a huge step forward [towards qualifying]."