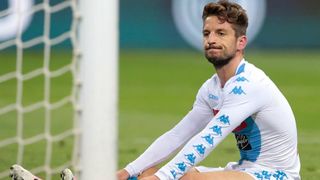 Lorenzo Insigne and Jose Callejon have called on Dries Mertens to end speculation over his future by signing a new deal to stay at Napoli.

The Belgium forward is out of contract in 2018 and has been linked with moves to Inter, Manchester United and Tottenham, while he rejected the chance to make a lucrative move to China in January.

Mertens' fine form this season has seen him score 22 Serie A goals to help Napoli ease the pain of Gonzalo Higuain's exit to Juventus.

And speaking after Callejon's goal gave Napoli a vital 1-0 away win at Inter, Insigne, who last month signed a new deal until 2022, called on Mertens to follow suit.

"Mertens has a lot of quality and can do well in any role," Insigne said to Mediaset.

"His goals are important, I hope he remains with us so that I get to play alongside him for a long time. He is a great player.

"The club knows how to keep its best players. I renewed my contract for a winning project and I hope he can do the same."

Four wins out of four games vs both teams from Milan, home and away:matcheswins 0-1 April 30, 2017

Callejon echoed that message after a San Siro victory that moved Napoli to within one point of second-placed Roma, Mertens having impressed by hitting the post and creating four chances for his team-mates.

"We want champions here," said Callejon. "We all want Mertens to stay, he is happy, in good shape and helps the team.

"We are up there in the table and that is what we wanted. We believe in our chances of finishing second.

"We came to a difficult arena against some big champions, but saw a Napoli side that was hungry and we want to continue like this."

Napoli president Aurelio De Laurentiis said last week that Mertens persuading his wife to remain in Naples would be key to the club's hopes of keeping the 29-year-old.