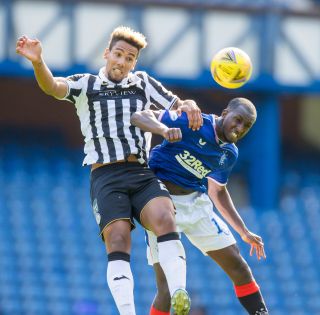 Isak Thorvaldsson has had his loan spell at St Mirren cut short but leaves with the best wishes of Buddies boss Jim Goodwin.

The 19-year-old Icelandic midfielder joined Saints on a season-long loan from Norwich in July but made only two substitute appearances against Livingston and Rangers.

The Canaries have since announced that Thorvaldsson has joined IA in his home country for the 2020/21 campaign.

Goodwin, said: “Of course you don’t want to be losing anyone from the squad when we are as tight as we are with numbers, but I am not going to hold anyone against their will either.

“It is too important a season for us as a club to have people here who aren’t really committed.

“So we thought it was best for both parties that Isak went back down the road.

“It was a big decision for the young lad. Isak is only 19 and from here to Norwich where his family are is a hell of long way and he probably didn’t realise at the time how far away it was going to be.

“It is always difficult as well when you are not in the starting XI as often as you would like.

“I think if he is playing every minute of every game then it is probably a different conversation again.

“He wants to be closer to home and that’s fine. He’s a great lad and my relationship with Norwich is one that is flourishing.

“We had a great time with Akin Famewo last year, they were delighted with the progress he made and he is back down there now and part of their first team.

“We were hoping for the same with Isak but sometimes things don’t work out the way you would like them to but I had no issues with his attitude, professionalism or anything like that and we wish him well.”