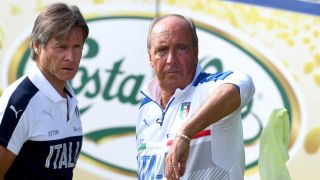 Giampiero Ventura is "sure" Italy will qualify for next year's World Cup in Russia, despite the country's disappointing loss to Spain.

It was a night to forget in Madrid on Saturday as Italy crashed to their first tournament qualifying defeat in 56 games, beaten 3-0 by Spain.

An Isco brace and a goal from substitute Alvaro Morata condemned Italy to their first loss in a qualifier since 2006 and put Spain in pole position to claim the one and only automatic World Cup berth in Group G.

Italy are three points adrift of leaders Spain and four ahead of Albania after seven matches as a play-off looms but head coach Ventura is confident the four-time world champions will be among the 32 teams to feature in Russia.

"When the group was drafted, we knew that for the first time only the winner would qualify," Ventura said ahead of Tuesday's visit of fourth-placed Israel.

"Of course, if you're not top seed and you play against Spain, you have to concede that you will probably have to go through the play-offs. Actually, that's what almost everyone thought at that time. We did a good job in getting tied to this game. We did not do a good job on Saturday, and Spain deserved to win.

Ventura continued: "When I said that Spain were not human, I meant it because of their qualities. You can't buy qualities, either you have them or you have to work hard to improve. But you can't do that in just 20 days.

"I believe that some teams are good and they can play at the same level with great teams just through hard work, otherwise the same team would win all over again. I started coaching one year ago and we played France 48 hours later, we had good results since then. Now we played Spain in September.

Italy captain Gianluigi Buffon, meanwhile, said: "We need to accept criticism. It's inevitable like the changing of the seasons. Personally, I don't feel resentment. We lost 3-0 in a very important game, I'm the goalkeeper and the captain, it's natural to receive criticism.

"The season started too well for me, so it's natural that something now goes wrong. People ask me if I felt hurt by what was said about me, but I honestly don't. This does not affect what I am and what I want to keep being."