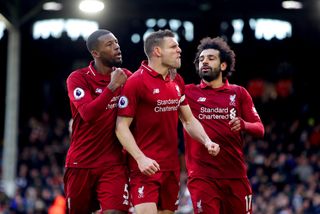 James Milner’s penalty sent Liverpool back to the top of the Premier League but they were far from impressive in a 2-1 win at Fulham.

Milner had to climb off the bench to rescue his side with an 81st-minute spot-kick as Jurgen Klopp’s men looked like they were going to drop two vital points in the title race.

A below-par Liverpool had gone ahead through Sadio Mane’s first-half strike, but a poor error from Virgil Van Dijk was capitalised on by former winger Ryan Babel to level for Fulham in the 74th minute.

Milner fired home the winner from 12 yards after Mane was adjudged to have been pulled down by goalkeeper Sergio Rico – a decision which looked soft at best by referee Craig Pawson.

But the Reds return to the summit, edging two points clear and putting the pressure on Manchester City, who were not in league action this weekend due to the FA Cup.

The loss was Fulham’s seventh in a row, which is a club record in the Premier League, and it appears only a matter of time until their Championship return is confirmed.

They had given as good as they got in the opening 25 minutes, with Jean Seri curling over from a good position and Babel industrious in his determination to produce against his former club.

But there was always a sense that Liverpool had the keys to unlock the Fulham defence and so it proved in the 26th minute.

The Reds made ground down the left, with Roberto Firmino getting to the byline, where he cut back to Mane to slot home from eight yards.

It was Mane’s seventh goal in the last five games and that run has been well timed considering Mohamed Salah’s now seven-game drought.

That proved the only moment of the first half to remember as Liverpool struggled to reach their peak powers, though they started better immediately after the break, with Van Dijk forcing a good save out of Rico from a header.

But Fulham also improved after the interval and had Liverpool on the rack as Floyd Ayite headed home from an offside position, correctly spotted by the linesman, and Andre Anguissa tested Alisson Becker with a low volley from distance.

With rain pouring at Craven Cottage, Liverpool weathered the metaphorical storm as well and Mane could have killed the game but his glancing header from a corner grazed the crossbar.

Van Dijk has been lavished with praise for his performances this season, so he will have to take the criticism for his part in Fulham’s equaliser on the chin.

He sold Alisson short with a headed backpass and after the goalkeeper was not the bravest in his challenge with Babel, the Dutchman emerged with the ball and rolled into an empty net.

Babel played 146 times for the Anfield club between 2007 and 2011 but proved the only red thing about him now is his hair as he looked like dealing a damaging blow to his former side’s title chances.

But Milner’s fourth league goal of the season won it for Klopp’s men with nine minutes to go as they got out of west London back on top.