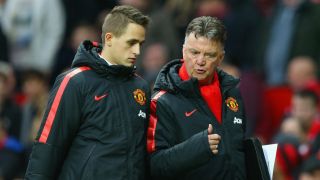 Real Sociedad winger Adnan Januzaj plans to dedicate his first goal for his new club to Louis van Gaal, with whom he had a "difficult" relationship during their time at Manchester United.

Januzaj made just nine Premier League starts across two seasons under Van Gaal and endured a less than successful loan spell at Borussia Dortmund during the 2015-16 campaign.

Van Gaal's successor Jose Mourinho also deemed Januzaj surplus to requirements and loaned him to Sunderland for the previous season, before the Belgium international decided a permanent move away from Old Trafford was best for his career, agreeing a five-year deal at Sociedad last month for a reported fee of €11million.

Currently struggling with a hamstring injury, Januzaj sat out Sociedad's 3-2 win at Celta Vigo last weekend to open their LaLiga season, and the 22-year-old has special plans for Van Gaal when he opens his account.

"If I score a goal I will dedicate it to Van Gaal," Januzaj told AS.

"I don't want to talk about him, but everyone knows how many problems I had with him.

"We didn't have the best of rapports. It wasn't easy, it's very frustrating and difficult when you are in a situation like that."

Although Mourinho also sent him out on loan, Januzaj bears no ill-feeling towards the Portuguese.

"I have nothing bad to say about Mourinho," he added. "I have no criticism of him as a coach. From the beginning he was fair."