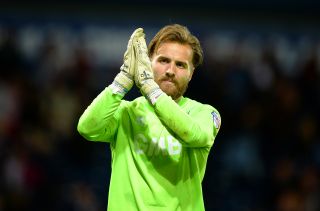 Jim Goodwin confirmed Jak Alnwick is the St Mirren player who tested positive for Covid-19 during the international break.

The Paisley club announced on Thursday morning that an unnamed player is currently self-isolating in line with government guidance and, as a result, will be unavailable for the match against Hibernian.

It was then revealed by Hamilton that defender Lee Hodson, who it emerged is Alnwick’s housemate, had entered a two-week period of self-isolation.

Boss Goodwin, who confirmed his interest in Ross County striker Lee Erwin, put no blame on his 27-year-old English goalkeeper.

He said: “We obviously don’t like naming names, I think it’s quite a private issue but at the same time somebody has managed to leak it online so there’s no point us denying it.

“I think it’ll be perfectly clear to everyone when the team is selected on Saturday.

“So we’re a bit disappointed for Jak but at the same time he’s doing well, he’s recovering, he’s following the instructions given to him by the doctor.

“He is getting the best of treatment, we are not overly concerned about it and hopefully he will be back fit for the Dundee United game.

“This is something that’s just going to continue to happen throughout the course of the season as long as this virus is here, then, footballers and every other member of the public will continue to get it.

“We are confident Jak has not been in a pub or a nightclub when he shouldn’t have been. It is just an unfortunate situation.”

The Buddies boss stressed that St Mirren have stuck by the rules in terms of making their training ground and stadium safe areas.

He said: “What I can say from our point of view as a club, there’s no way that Jak has picked it up while he’s been here at Ralston (training ground) or down at the stadium.

“The club have done everything they can, they’ve followed the strict guidelines that have been set out by the SFA, the SPFL and the Joint Response Group and we can’t do any more as a club.

“Players and the staff members, everybody needs to go home and some of our partners and wives are going out to work every day.

“I’ve got three kids at home or going to school on a daily basis and mixing hundreds of other children.

“So we can only do what we can within the environment that we work in.

“We can’t unfortunately control everything so it’s just been a really unfortunate situation but as a football club we can’t do any more.”

In his interest in the Staggies’ 26-year-old striker, Goodwin was positive.

He said: “We got wind that Lee was wanting back down to the Glasgow area for family reasons.

“He’s a player that I’ve always liked, a real kind of good young Scottish prospect, a great age for us and a kind of an old fashioned number nine if you like.

“And if we do manage to get that one over the line then that’s where we would see him play in and it would be great competition for Jon Obika but also, we would like to see the two of those guys playing together as well because I think they’d be a real handful for any opposition.”