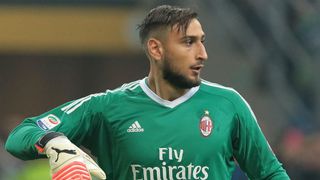 Gianluigi Buffon has told Gianluigi Donnarumma he will not be making a mistake if the teenager chooses to swap AC Milan for Juventus.

Goalkeeping great Buffon is expected to retire at the end of the campaign and Donnarumma is widely viewed as his heir in the Italy national team.

The 18-year-old was embroiled in a contract saga at San Siro during the close season and eventually penning extended terms has not entirely mended relations with a section of the Milan support, who have jeered Donnarumma this term.

His future continues to be the source of speculation, with LaLiga giants Barcelona and Real Madrid reportedly holding an interest.

But, in an interview with Gazzetta dello Sport, Buffon has suggested the man 21 years his junior could do worse than looking towards Serie A's dominant force for his next career move.

"I do not live his situation but one thing is certain, if he comes to Juventus he's never wrong," Buffon said.

"I do not know the emotional connection that he has with Milan. What makes the difference is what vibrates inside your soul."

Italy centre-back Leonardo Bonucci moved in the opposite direction in July amid reports of a breakdown in relations with Juve coach Massimiliano Allegri.

The 30-year-old has so far struggled for his best form at Milan and Buffon believes his long-time colleague acted impulsively in pushing through a shock transfer he might now regret.

"I love Leo as a brother because, even in his excesses, I like him so much," he said. "He has healthy values and is an incredible player.

"The Juve environment was perfect for him. I was sorry he left because it seemed to be the choice of an impulsive and proud man.

"Every now and then, speaking to him, I told him and he replied that he was not impulsive but made a thoughtful choice.

"Leo lives on challenges, he needed to reignite the fire with a strong and unpopular choice. I respect him but I'm sorry and think he's even very sorry now."