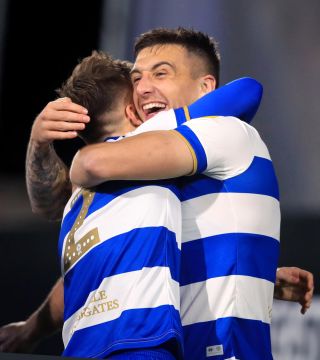 Jordan Hugill scored twice as QPR thrashed Swansea 5-1 to comfortably secure a place in the FA Cup fourth round.

In-form Bright Osayi-Samuel also netted for Rangers, who are on a roll following the recent 6-1 hammering of Cardiff and were three up by half-time.

Substitute George Byers netted for Swansea in the second half but Lee Wallace’s brilliant volley with 14 minutes remaining and an even better strike from Josh Scowen in added time completed the rout.

But Rangers took the lead courtesy of a fine goal by Hugill, who controlled Todd Kane’s 21st-minute cross on his chest and volleyed past keeper Kristoffer Nordfeldt from 15 yards.

A mistake by former QPR defender Jake Bidwell led to the home side doubling their lead just before the half-hour mark.

Bidwell tried in vain to shake off the persistent Osayi-Samuel, who chased him across the edge of the penalty area and robbed him of the ball before side-stepping away from Brandon Cooper and finishing coolly.

It was a disastrous 25-minute spell for the Swans, who would have been further behind by the interval had a shot from Chair found the target rather than flashing narrowly wide.

Rangers continued to dominate after the restart, with Osayi-Samuel sending a powerful drive wide, before a mistake by Geoff Cameron led to the visitors pulling a goal back on the hour.

Cameron broke up a Swansea attack, dodged one challenge near the edge of the penalty area and was intent on bringing the ball out of defence, but he ran into Byers, who fired past keeper Liam Kelly – and also hit the near post with a late effort.

Rangers remained a threat at the other end and Nordfeldt denied Hugill a hat-trick by keeping out the on-loan West Ham striker’s header from Chair’s corner.

Nordfeldt also tipped over a shot from Olamide Shodipo seconds after the winger had come on as a substitute.

But Nordfeldt could do nothing about Wallace’s thumping right-footed strike from 20 yards out – his first goal since arriving from Scottish side Rangers during the summer.

And Scowen scored with a stunning volley into the far corner from the right-hand side of the penalty area.