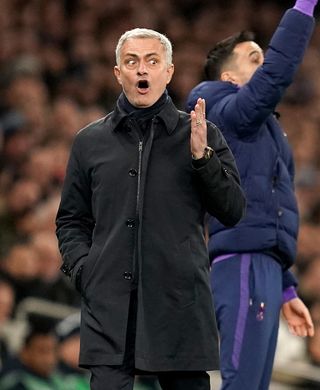 Spurs, who are in FA Cup action at Southampton this weekend, are due to clock off for two weeks after next Sunday’s league game with Manchester City.

They will return to action against Aston Villa on February 16 – three days before their Champions League last-16 tie with RB Leipzig.

The winter break is split over two weekends, so Spurs in theory could have had their game with Villa on the weekend of February 8-9, giving them more time to prepare for their European fixture.

“It is what it is. I am not happy that the break comes in the wrong moment because the break should be before the Champions League,” Mourinho complained.

“In the end before the Champions League we don’t have the break. We have to play Aston Villa on the Sunday before playing Red Bull (Leipzig) two days later.”

To make matters worse, if Spurs draw at Southampton on Saturday then they will have to play a replay on February 4-5 – when they are supposed to have downed tools.

Mourinho is less concerned about that, adding: “We really don’t care about the break really.

“If we have to play Southampton in a second match it means we are still alive in the competition and it is better than losing.

“If we can choose a result, the one we are going to try to get is of course to win the match, if we get a draw we are still alive. To play at home in the second match is better than to lose.”

Spurs will head to St Mary’s without a recognised striker following their failure to sign a replacement for Harry Kane.

Teenage Troy Parrott is their only other out-and-out striker, but he is 17 and Mourinho has said he is not ready to replace Kane.

But he might get the chance to impress at Southampton.

“He is ready to work with us every day like he is doing,” the Portuguese added. “He trains with the group, after training he has a special programme of individual development of his qualities as a striker and this club takes very good care of the players.

“That is the only thing I can say. If he has to play with us, he will.

“But in this moment I cannot tell you, it is possible he is selected for this game.”