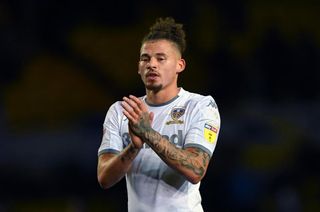 The race to the Premier League was in full flow when Sky Bet Championship programme was suspended with just nine games remaining.

Here, in the first of a series looking at some of the most influential players in the second tier, the PA news agency examines the contribution of midfielder Kalvin Phillips to leaders Leeds’ promotion bid.

Where has Phillips come from?

Kalvin Phillips is the latest @LUFCacademy product to step up to the first team. He makes his #lufc debut today. pic.twitter.com/P8haGpunJ7— Leeds United (@LUFC) April 6, 2015

Born in Bramley as one of triplets – one of his sisters died as a child – Phillips is a local boy made good. He joined Leeds’ Academy from local side Wortley Juniors as a 14-year-old after being spotted at a tournament having turned up to watch his friends play and been drafted in to make up the numbers. He was handed his senior debut for the club by Neil Redfearn in a 4-3 Championship defeat by Wolves in April 2015 and became a regular during Garry Monk’s tenure.

What type of player is he?

Versatile, dependable and combative. Used largely by current boss Marcelo Bielsa as a holding midfielder, he can also play in central defence, and that adaptability is highly valued by the Argentinian. His tenacity has been a major feature of the club’s rise to the top of the table this season, although his red card a QPR in January – the fourth of his career – cost him a three-match ban and the seven bookings are testament to the fine line he treads at times. He has the ability to switch play with accurate long passes and is also a threat with his delivery from free-kicks.

What impact has he made this season?

Phillips, dubbed “the Yorkshire Pirlo” by the club’s fans, has started 31 of Leeds 37 league games to date this season and has missed four through suspension. He is a fixture in Bielsa’s strongest side and it is perhaps no coincidence that in the three games the Elland Road club played during his three-match lay-off earlier this year, they lost two of them at home to lowly Wigan and at Nottingham Forest.

Has his rise gone unnoticed?

Far from it. Having been linked with a move away from his home-town club last summer, his performances this term have prompted further speculation with top-flight Sheffield United, Wolves and Burnley among those said to be monitoring his situation amid suggestions of £20million-plus bids being prepared. His form also appears to have caught the attention of England boss Gareth Southgate, who was reportedly ready to call him up for this month’s now postponed friendlies against Italy and Denmark.

Will he keep his feet on the ground?

There is little doubt about that. Bielsa’s scrutiny is intense as he attempts to develop Phillips’ emerging talent and there is little chance of him getting ahead of himself despite the rave reviews he has received this season. In addition, he revealed in a recent interview that his working-class background and the words of his mother Lindsay are never far from his mind. He said: “As a family, we’re very close and my mum’s always told me, ‘Don’t ever think you’re better than you are. Be grounded and proud of where you’re from’.”