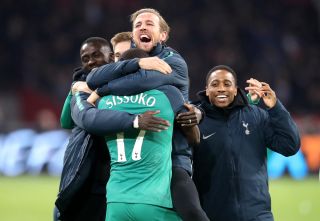 Harry Kane is optimistic about recovering from an ankle injury in time to play in the Champions League final.

Kane was a spectator in Amsterdam as Tottenham came from 2-0 down on the night, and 3-0 down on aggregate, to beat Ajax in another dramatic semi-final.

The England striker was able to run across the pitch to celebrate with his team-mates, and he now has his sights set on the all-English showdown with Liverpool in Madrid on June 1.

“Hopefully. Rehab is going well so far,” he said. “I start straight-line running this week.

“We’ll see. So far so good, so if it carries on as it should I would hope to be (fit). There’s still a few weeks to go.”

Kane joked that he faces a battle to earn his place, after Lucas Moura’s hat-trick and substitute Fernando Llorente’s inspirational performance against Ajax in his absence.

He said: “We beat Manchester City, we beat Ajax in the semi… I’ve got to start training even harder and prove myself in front of the gaffer.”