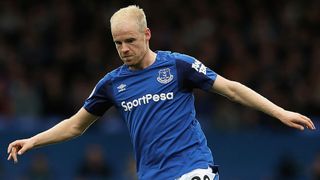 Everton manager Sam Allardyce has advised Davy Klaassen to find first-team football away from Goodison Park, admitting the Netherlands midfielder is not in his plans.

Klaassen, 24, cost Everton €27 million last July but he has failed to recapture the form that delivered 14 goals in 33 appearances for Ajax last season.

The playmaker has made just three Premier League starts for Everton and he was replaced after just 55 minutes in his last appearance against Bournemouth in September.

Allardyce, who has not picked Klaassen for any of his domestic match squads, told The Mirror: "Because he has never appeared on the subs bench it would be of better benefit for him and the club if he moved on just on loan.

"He is quite willing to sit and stay and fight for his place but at this moment he is better going out and playing some football. I think that would benefit him and give him the opportunity to play.

Allardyce indicated that Klaassen should not give up hope on his Everton career just yet, but suggested his opportunities this season would be limited.

"You look how many players don't make it in their first season from abroad," said Allardyce. "There are hundreds and hundreds of them. And at every club.

"Given a full pre-season and then you wait and see. Maybe next season he might be good enough."