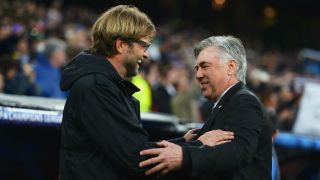 Jurgen Klopp is not falling for the mind games of "smart fox" Carlo Ancelotti ahead of Liverpool's Champions League trip to Napoli.

Ancelotti, a three-time winner of the competition, described Liverpool as one of the strongest sides in Europe in the build-up to Wednesday's tie.

Liverpool reached the final of last season's competition but lost to Real Madrid after Mohamed Salah was injured and Loris Karius made two dreadful mistakes.

The Reds opened their 2018-19 campaign with a thrilling 3-2 home win against Paris Saint-Germain, while Napoli drew away to Red Star Belgrade.

And Klopp feels Ancelotti was trying to earn an advantage by lavishing Liverpool with praise at his pre-match news conference.

"I like Carlo, I respect him a lot," Klopp told reporters. "He was a world-class player and he's obviously a world-class manager.

"But, as we say in Germany, he's obviously a smart fox. Giving all these positive things about us, saying all these nice things about me before a game, it’s nice. But it is tactics – he's so long in the business and trying to bring the nice fellow out of me.

"But I'm here ready for a real battle. I don't care about what people say about us and what they see from us in this situation. Yes, we have performed on a consistent level in the last few weeks, but tomorrow we need to step up.

"This is a fantastic match, a fantastic football team [in Napoli] and a very emotional crowd. It's going to be a real challenge."

Klopp's last visit to Napoli as a manager saw him sent off in the first half of a 2-1 loss for Borussia Dortmund after his angry response towards the fourth official.

The German watched the second half with the Stadio San Paolo's groundsman and said he is hoping for a reunion on Wednesday, although he does not intend to be dismissed for misbehaving again.

"It was one of the better experiences I've had. He's still here - that would be nice [to meet again]," Klopp added. "We couldn't speak that much on that occasion and we cannot speak much now, as my Italian has not improved since then.

"It was not my best performance, personally. I reacted in a way that was absolutely not okay. I understand why I was not happy but the reaction was too much – I watched two games from the stands, one against Arsenal at home and I don't know the other one.

"It was because my behaviour was not so good in the Bundesliga as well. But since then it's been better – that was the last time I got a little too excited. Now I know it will not happen again."