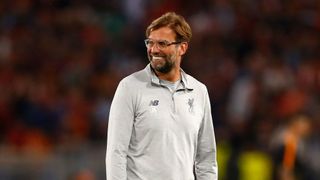 Jurgen Klopp is delighted that Liverpool have finished the Premier League season in the top four so he can now look ahead to an "exciting" Champions League final.

The Reds reached the Kiev showpiece against Real Madrid by defeating Roma in the semi-finals earlier this month, but their place in next season's competition was not secured prior to the final day of the domestic campaign.

A 4-0 thrashing of Brighton and Hove Albion booked Liverpool's place, though, and that means Klopp can finally focus on the biggest game of his side's season.

"We have two weeks to prepare for our biggest game so far, that's for sure," he told a news conference. "It's a massive one, but now I am really looking forward to it.

"So far, it was always a bit, 'Come on, let's not talk about it, we have to play this game and this game first.' Now, we will be ready and that's really cool.

"That's then maybe not the best option to choose, but it's really cool now. It will be exciting."

James Milner was missing with a muscle injury for the Brighton game, but Klopp is not concerned about his midfield man ahead of the European final on May 26.

"Only today it was not possible [for Milner to play]," he said. "I think the next three or four days he will still need and then he will be fine again.

"Even Millie the machine needs a few days sometimes and this game was not possible."